Availability: Out of stock

Fast Delivery | Easy Returns | Secure Payments
Get more details from our FAQ | How to sell
Check delivery, Payment options and charges at your location
Recommended Product 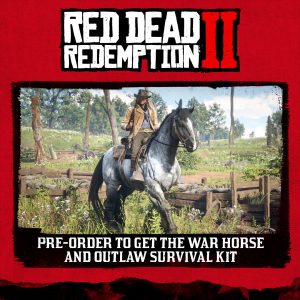 War Horse: This handsome iron-grey-coloured Ardennes War Horse can always be relied on in the heat of the battle. With greater courage and stamina than the average steed, this is a horse that knows how to keep its head under fire.

America, 1899. The end of the wild west era has begun as lawmen hunt down the last remaining outlaw gangs. Those who will not surrender or succumb are killed.

After a robbery goes badly wrong in the western town of Blackwater, Arthur Morgan and the Van der Linde gang are forced to flee. With federal agents and the best bounty hunters in the nation massing on their heels, the gang must rob, steal and fight their way across the rugged heartland of America in order to survive. As deepening internal divisions threaten to tear the gang apart, Arthur must make a choice between his own ideals and loyalty to the gang who raised him.

Another masterpiece from rockstar games hatsoff

Recently Viewed Products
How to sell at GameXS

Place a sell order for your video games, consoles, & accessories.

Pack your items, paste shipping label & hand it over to our courier partner.

Receive Cash or GameXS credits for your eligible trade-in items

Trade in old games/consoles for the latest at GameXS. Get best prices & free doorstep pickup.
No listings, No negotiations, No hassles. Sell your games in 30 seconds.

For more information, please read our Trade in Policy or mail us at support@gamexs.in

Subscribe here. We promise to not spam, be exciting and not invade your inbox too often.

Shipping
Refund
How It Works
Contact Us
FAQs
Blog